Guangdong, or Canton, is the economic centre of Southern China. With its population at 104 million and GDP of $1 trillion, Guangdong leads Chinese regions in both market size and economic scale. It has been the largest province in successive decades.

In 2013 Guangdong reached a significant milestone: $1 trillion in GDP which makes up one-ninth of China’s total and $1 trillion in import and export, which accounts for one in four pounds of Chinese. Guangdong is the undisputed gateway of trading with China with its export amount to one in four pounds of Chinese export. A quarter of current British trade with China goes through Guangdong.

More and more Chinese companies from Guangdong are investing in the UK market. Leading technology companies like Huawei, ZTE, TPLink and Hytera have made Thames Valley and the areas around Heathrow — the Silicon Valley of Europe – home for their European HQ.

Establishment of official representation of Guangdong Province in the UK is to boost the ever expansion of trade and investment between the UK and Guangdong and South China. Guangdong is the economic driving force of Greater Pearl River Delta Region, which include Hong Kong and Macao.

In June 2014, Chinese Premier Li Keqiang led a large business delegation visiting the UK and signed a historic £18 billion worth of agreements. 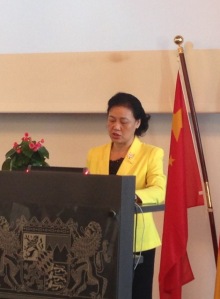 Kegang Wu, Executive Director of BCC LinkToChina, will head up the Guangdong Office.